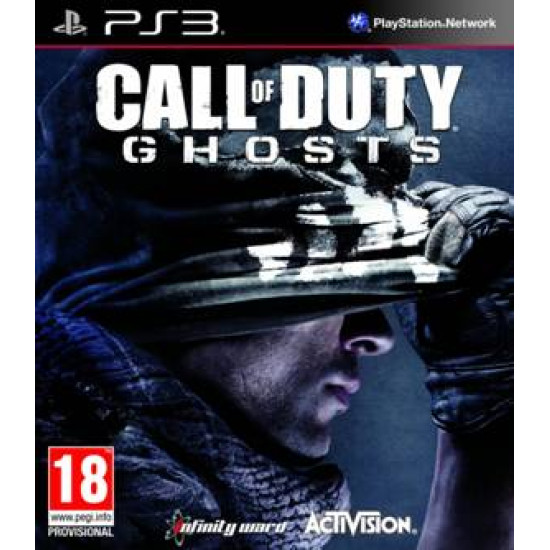 Preorder now and get the No Man's Land DLC

Call of Duty: Ghosts (Working Title: Call of Duty: 10) is an upcoming first-person shooter video game from Activision to be the tenth main installment in the Call of Duty series, and the sixth developed by Infinity Ward. The game is to be released for Microsoft Windows, PlayStation 3, Wii U and Xbox 360 on November 5, 2013 and will be published in Japan by Square Enix on November 14, 2013.

Ghosts will also be the first Call of Duty game available on the PlayStation 4 and Xbox One, as a launch title, later in November 2013.

As confirmed in the behind-the-scenes video released by Call of Duty, the multiplayer in Call of Duty: Ghosts will not be like all previous Call of Duty games. New mechanics have been added to the multiplayer. Maps now have areas that can be altered or destroyed. On certain maps, there is a Nuke-like killstreak that can be used by killing the top player on the other team and then completing various challenges after picking up a briefcase that is dropped.

Call of Duty: Ghosts takes place in a near future following a catastrophic event that changed the global balance of powers in the world. As a result, the United States lost its superpower status and was reduced into rural ruins in the mainland after the event. Ten years later, a powerful enemy emerges as a threat to the United States, but remnants of US special operation forces from every branch came together to create an elite group of soldiers known as the "Ghosts", who are determined to eradicate all threats to protect the weak and the remains of America.

On April 29, 2013, the official Call of Duty website was updated with a social media mosaic that filled up every time a user logged into the site via Twitter or Facebook. The next day, the mosaic was completed and the picture showed a skull along the text "the Ghosts are real." Some details aboutGhosts leaked prior, especially when Tesco pulled the listing of the game for the PlayStation 3 after it was put up accidentally. Several other retailers, including Target, listed it for PlayStation 3, Xbox 360, and PC. The live-action teaser trailer for Ghosts, titled "Masked Warriors", features glimpses of people wearing historical battle attire, among them one of a group of soldiers putting on the skull mask shown on the box art. It was released on May 1, 2013. Ghosts appeared at the "Xbox Reveal" event on May 21, 2013.